Before You Go: 7 Everyday Symbols of Bali You Need to Know

It is no secret that Bali is imbued with a deep-rooted Hindu spirituality. From the flower offerings made to the smallest of shrines each morning, to extravagant temple ceremonies and colourful processions that fill the streets with vibrant pageantry, each sacred ritual and every place of worship is rich in symbolism.

If you are lucky enough to be in Bali during big festivals such as Galungan, which celebrates the victory of good over evil, you will see streets lined with elaborate penjor – tall ornamental bamboo poles covered in palm leaf decorations and holy drawings that flutter in the breeze. Essentially a shrine, each penjor is highly symbolic. The curved part represents holy Mount Agung – an abode of the gods, the straight pole depicts the rivers that run from the mountain to the sea, while the fruit and vegetables tied to the pole symbolise earth’s bounty. 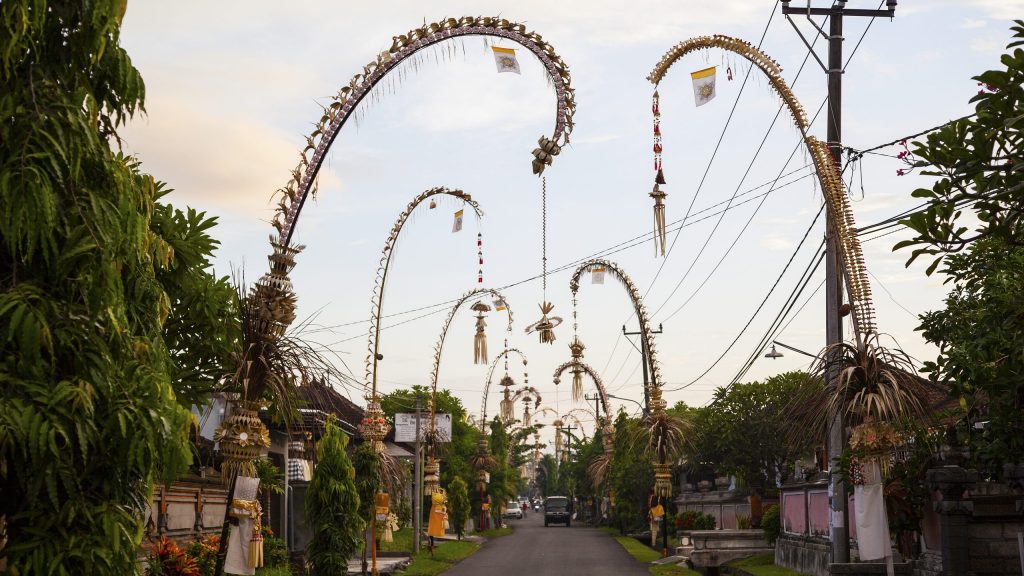 European visitors are often surprised to see the swastika adorning temple walls and sacred objects in Bali. While a version of the symbol is now infamous as the Nazi symbol, the original swastika is the oldest religious symbol in existence and is found in many cultures and religions. In Balinese Hinduism, it represents good fortune. Like a lucky charm, it is used to ward off negative forces, which is why you find it carved into doorways and thresholds. You may also hear the greeting Om Swastiastu, which is also derived from swastika and means ‘May you attain prosperity and peace’.

You will see this black and white chequered cloth at every corner in Bali. A symbol of mindfulness, kain poleng (two-coloured cloth), is most commonly seen wrapped around trees and shrines. It represents duality, which is a central tenet of Balinese Hinduism – yin and yang, darkness and light, good and evil. There is a recognition that one cannot exist without the other, but for the sake of harmony, the two need to be kept in balance. You will also see pecalang (temple security officers) wearing kain poleng – as they are expected to be able to distinguish between right and wrong. 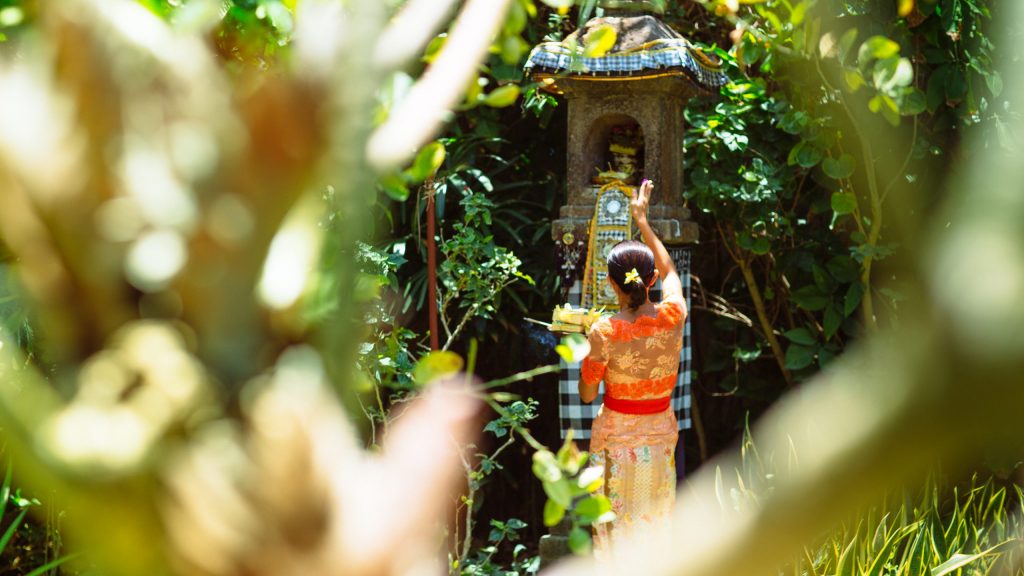 Each morning the gods are shown gratitude with canang sari (pronounced: chanang). These compact square-shaped baskets are woven from palm leaves and filled with bright, fresh flower petals, betel leaf and small rice cookies – each ingredient having its own significance. They are then placed high inside family temples and shrines, along with burning incense. Simpler versions are left on the ground, often with cigarettes or sweets and are intended to appease the lowly evil spirits. Be careful while walking to avoid stepping on one. 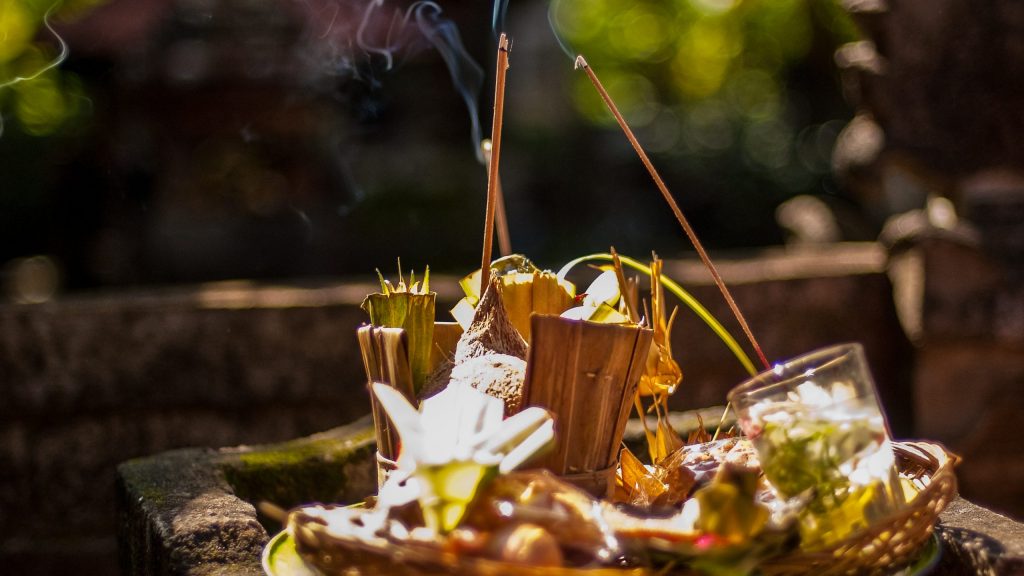 Candi bentar, or ‘split gateway’ is a classical Balinese and Javanese gateway found at the entrance of temples and denote a mountain that has been split into two. Mountains are considered sacred, and these intricately carved gates are seen as portals that connect the physical and spiritual world. Symbols and mythological characters are often carved into the stone, including scary monsters believed to prevent evil spirits from entering the sacred temple. The guardian dragons and demons that flank the stairways leading up to the gateway have a similar role. 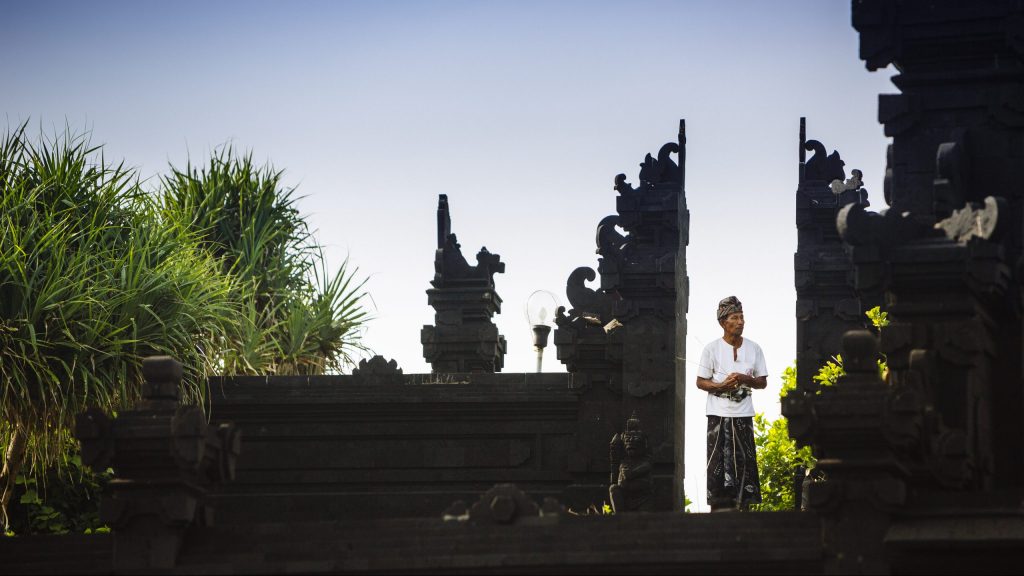 Bali’s vibrant processions are a memorable sight, with young boys carrying colourful silk parasols and women dressed in white lace blouses and colourful sarongs carefully balancing gebogan on their heads. Traditionally made from freshly harvested fruit and flowers, gebogan are an offering to the gods in gratitude for infinite blessings. Arranged as a cone-shaped tower which can stretch up to one and a half meters, this offering also represents aiming high when it comes to your goals. Once it has been presented at the temple, the gebogan is taken home to be shared with family and friends. 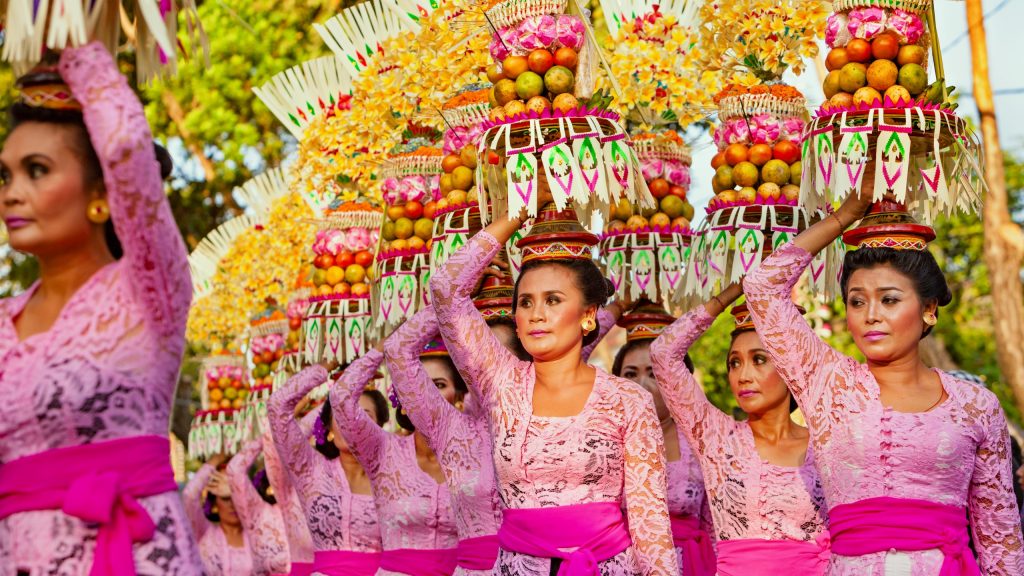 Wherever you go in Bali, you will hear the distinct and melodious sound of rindik, a percussion instrument similar to a xylophone, which is made from bamboo tubes suspended on a wooden frame. Generally played by two men, the rindik is the traditional accompaniment to temple dance performances. It is also a crucial part of the sacred Balinese Gamelan orchestra, in which each instrument is believed to be guided by a spirit and must be treated with absolute reverence. 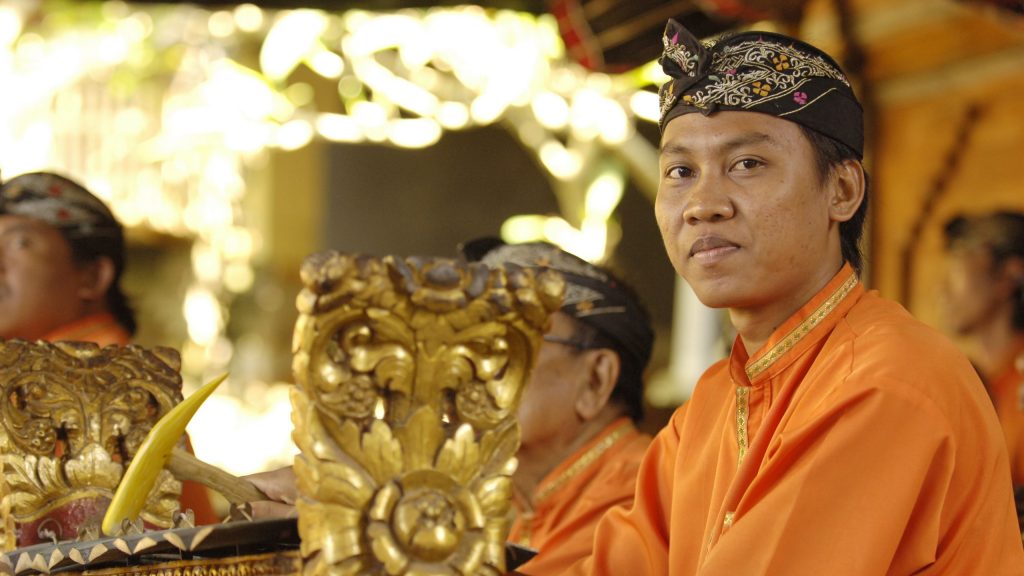 What better way to enjoy the island than in the supreme comfort of a luxury villa in Bali? Whether you are looking for a beachside escape in Canggu, a clifftop retreat in Jimbaran, or a scenic hideaway in the hills of Ubud, Elite Havens’ villa specialists will have the perfect selection of Bali luxury villas for you.